Don't miss FourPlay as they showcase Bound along with tracks from their entire career, live @ the Baroque Room, Friday June 8. Every concert ticket includes a free download of Bound. See below for tour and ticketing details.

With five albums plus a double remix ++ album under their belts, FourPlay started their career wowing audiences at festivals and sell-out headline shows with radical reinventions of popular songs, covering everyone from Radiohead and Rage Against The Machine to Sufjan Stevens and Leonard Cohen. Their last release (2014's This Machine) was the first to feature 100% original material composed by the four members: brothers Peter and Tim Hollo, Lara Goodridge, and Shenzo Gregorio.

The new single 'Bound' is classic FourPlay, a cut that's got it all: a big dirty riff that pushes and pulls, urgent and soaring vocals, a deeply melodic chorus, and a crazed viola solo to push everything over the edge.

Bound began as a riff inspired by Jack White and Beyoncé, written out of a jam while the band was a guest of the Bundanon Trust's Artist-In-Residency program in the Southern Highlands of NSW. Vocals were later added by Lara Goodridge with lyrics about staring life's challenges down while taking responsibility for who we are, and who we love. Bound reminds us that our decisions have repercussions, and that ultimately we're all bound together. It's big and bold and sure to be a live favourite on this upcoming tour!

As a bonus for fans of FourPlay's electronic side, the single includes three archival remixes from the band's Now To The Future album, unreleased to this day: 'Evolve or Decay (Monk Fly remix)' by Chris Hancock (from 2011), 'The Hunter (The Quickening - Comatone remix)' by Greg Seiler (from 2008), and 'Trust (one wrong 2-step remix)' by raven (Peter Hollo) (from 2005, revisited in 2014), the solo project from FourPlay's own cellist Peter Hollo.

*** Every ticket purchase includes a free download of Bound.

Venue: Baroque Room, Bathurst Rd (Above the Harp and Fiddle) , Across the Rd from Train Station, Katoomba, New South Wales 2780. 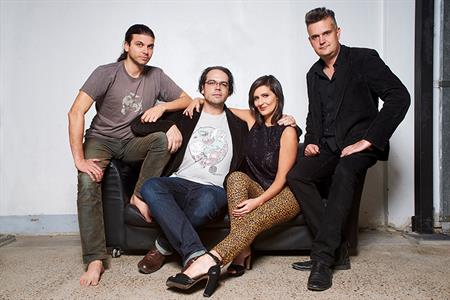